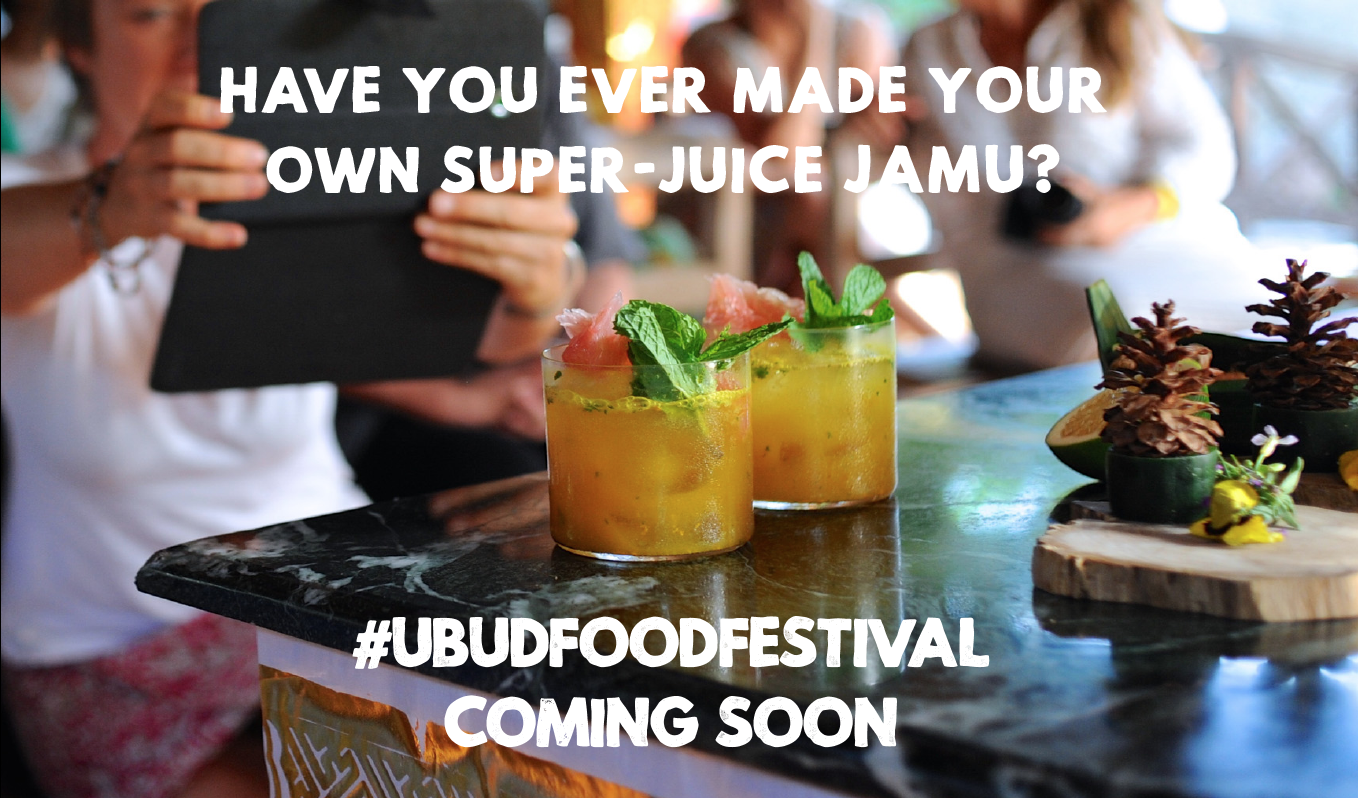 In the lead up to the Ubud Food Festival (27-29 May), we’ll be showcasing chefs and restaurants who form part of the island’s vibrant culinary community. In this article, originally appearing in the Bali Advertiser, Renee Thorpe chats to chef Arif Springs of Taksu Spa, who will be hosting a raw food workshop as part of the Festival, as well as a Cooking Demonstration on making your own Jamu. Tickets for the event will be on sale in mid-April, so be sure to sign up to our e-news to be the first to know!

Nestled in the heart of Ubud, yet miraculously off its beaten pathways, lies Taksu Spa, a destination within our storied village of ancient medicine, healing waters and mystical culture. Featuring a café and a restaurant and an alternative healing center, Taksu quietly came onto the scene a few years ago and is now realizing its vision as a resource for holistic health.

Utilizing an aquaponics garden within raw food restaurant Fresh, Taksu offers regular workshops in the preparation and enjoyment of a raw diet including Indonesian medicinal plants and foods.

The Sanskrit word ‘taksu’ could be succinctly (if somewhat incompletely) defined as divine inspiration.  Many may seek taksu, some may try to make a holiday around it, but Fresh Chef Arif Springs found his calling in the taksu of Bali’s botanical bounty.

Arif’s Sundanese grandmother (nenek) was a folk healer and medicine woman.  She would treat his childhood cuts and injuries by applying poultices of rice and ‘kencur’, a root with proven healing properties.  The forest and field were her medicine chest, and she knew how to properly prepare the raw ingredients. Arif explains that the toxic properties of a plant such as mahkota dewa must be boiled out to turn it into a powerful antioxidant, and quite a bit of expertise is needed to handle such botanicals safely.  Even Big Pharma confirms the efficacy of Grandmother’s blend of Ayurvedic and Chinese medicine, and such products as Tamiflu owe their miracles to the dried spices long used by indigenous healers.

It would take a journey through culinary school and 5 star kitchens to bring Arif full circle and champion his nenek’s ancient knowledge from the standpoint of a top chef.  Having mastered fine western cooking in Jakarta, Arif saw Ubud as an important emerging food destination.  His first immersion in an organic kitchen was Sari Organik.  Today, with Sea Bass as the one non-veg option in a near-macrobiotic kitchen, Chef Arif is a leader in Ubud’s raw food movement.

“Local people understand the principle of harmony but they don’t [connect that to] the nutrition of a raw food diet,” Arif tells me.  “Too many Indonesians are eating fried foods and getting a bad gut from eating meat.  Balance [applies] to how you treat your body.”

Arif begins the tour with an explanation of aquaponics, an ingenious construction of Taksu’s specially filtered water, fish tanks (for fertilization), local stones, PVC pipes and raised beds.  Thai basil, tomatoes, and parsley thrive here.  Unlike hydroponics, no chemicals are used at any stage.  In true holistic fashion, diners are seated in comfortable booths and tables right amongst the beds, with haricot vines making filigreed screens of green.

I recognized a few of my own garden residents as features of Taksu’s tidy patch of living medicines.  ‘Kumis kucing’ is an important parasite killer, and yet it can be seen thriving in the island’s vacant lands, or in driveway cracks, its pillars of tiny white flowers reaching for the sky.

Supplementing the wealth of produce brought in daily from local organic farms, the Taksu garden serves as a compelling demonstration of what anyone with the tiniest patch of land can do to help allay the effects of development.

But let’s get down to the food!

A sampling of Arif’s raw cuisine began with a delightful glass of ‘jamu’, the familiar turmeric tonic that fights free radicals, especially if taken every day (the recipe for which will be revealed by the chef himself at his Cooking Demonstration at this year’s Ubud Food Festival!). Arif points out the connection of jamu with the 8 directions in Hindu dharma.  “In nature, each direction has a deity and a jamu,” he explains. “If you see the body as a temple, you know to bring it balance.  Prayer, wisdom, and health: all are [equally] important.”

Arif says that when the five Chinese elements (wood, fire, earth, metal and water) are balanced, the spirit can be addressed.  He sees a direct relationship between Bali’s reverence for water and the body’s physical need for pure water on the farm and in the diet.  Taksu’s own water purification plant ensures that absolutely no chemicals are making their way into the systems of the plants, either in the medicinal garden one side of our table, or in the aquaponics to the other side.

Chef Arif opens the menu, remarking that Italian and Mexican cuisine have their own raw dishes.  So I tried the Enchiladas and the Living Lasagne.  These came plated beautifully with a satisfying mixed salad on the side.  The distinctive flavors of each main would surely win over even a hopeless meat-and-potato man.  Arif’s own sundried tomatoes and the lasagna layer of richly spiced sunflower seeds were revelations on the palate, as complex in flavor as any processed condiment and far more nutritious.

Everything our waitress brought to table was vibrant and alluring, freshly cut and assembled in keeping with the slow food tradition.  Crunchy Pumpkin Seed salad was enhanced by slices of coconut “bacon”, one of Arif’s proudest creations. His patented anxiety buffer, the Cucumber Seaweed Avocado salad, arrived as a huge Aussie style bowl of dressed greens (from sea and field) with a touch of local chilis to give it a robust kick.

Arif waxed philosophical, if practical. “Even if you can’t get yourself through a detox program, all bodies need more nutrition.  Tourists coming here already know [a lot about the benefits of raw food] but Indonesians are now slowly finding out.  Not just yogis but ordinary people.”

What will Arif bring to the Ubud Food Festival next month? “I’m thinking of demonstrating my almond satay,” he enthuses. A proven wizard with tree nuts, seeds and pulses, he’ll surely produce a winner!