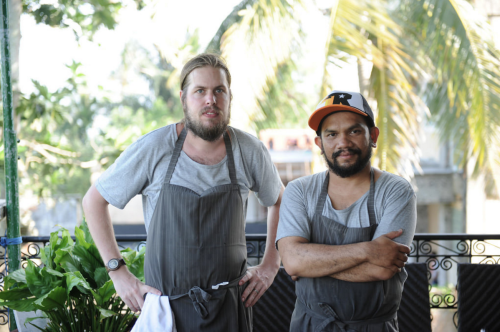 With a host of Ubud Food Festival chefs taking out top spots at the 2017 S. Pellegrino & Acqua Panna Asia’s 50 Best Restaurants Awards last night, the role of the UFF in bringing together Southeast Asia’s best culinary talent and showcasing Indonesian cuisine to the best chefs in the world has been reinforced once again.

Bringing his classical French training to UFF audiences in 2016, chef Julien Royer of Singapore’s Odette restaurant came in at no. 9 – the list’s highest ever new entry. Australian grill master Dave Pynt – whose famed Singapore grill house Burnt Ends came in at no. 10 – appeared alongside chef Ryan Clift at the UFF in 2015, whose molecular fine-dining establishment The Tippling Club came in at no. 27.

This year’s UFF will welcome chefs Bo Songvisava and Dylan Jones, the husband and wife duo behind Bangkok’s Bo.lan, which climbed to no. 19 on the Asia50 list.

“I am looking forward to exchanging knowledge, passion and deliciousness at Ubud Food Festival, to learning and exploring more about other cuisines and to savoring great food,” said chef Bo ahead of the event.

Chef Dylan also expressed his enthusiasm for collaborating with local chefs, commenting that: “I’ve never been to Bali so I’m really excited to see the local food scene and to sample what’s on offer. I can’t wait to meet local chefs and exchange knowledge with them.”

Locavore, the fine dining Ubud restaurant with a focus on local produce, has made Indonesian history by rocketing up the list from number 49 to number 22. Not only is Locavore Indonesia’s only entrant on the current list, but this climb also makes it the highest ever in the list’s history.

Locavore have been a firm UFF fixture since the beginning, and at this year’s Festival the team will reveal the concept of their new restaurant and create a special event focusing on sustainable seafood.

“The number of chefs on this year’s Asia50 list who are friends of the Festival shows that we have – in just three years – grown into Indonesia’s leading culinary event,” said UFF Founder and Director Janet DeNeefe. “We’re so proud to see such brilliant talent being harnessed in the region and can’t wait to see what comes out of this year’s UFF!”