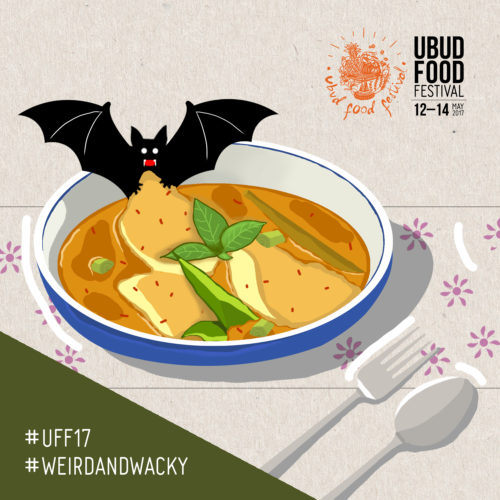 There is a saying in Manado, capital of North Sulawesi: “Manadonese eat everything with four legs – except tables and chairs.” The Minahasans, the ethnic group of North Sulawesi, are notorious for their ‘unusual’ meat choices – fruit bat and dog are often on the menu. Before the Minahasans converted to Christianity (North Sulawesi was first colonized by the Portuguese) they were animists who lived in some of Indonesia’s lushest rainforests, which flapped and crawled with jungle creatures. It made perfect sense to eat fruit bat!

Called paniki, it is a surprisingly substantial and succulent, sweet meat, which is usually served as paniki woku, a mild yellow curry laced with lemongrass and kaffir lime leaves. The meat is not unlike chicken, but lighter and finer. Its pleasant sweetness is of course because the large, black bats dine on tropical fruit all day. Delicious.