From East to West | Food Musings from West Java

In this blog series we will dig deeper into the incredibly diverse foodstuffs that make up the Indonesian culinary landscape. This week, Julia Winterflood brings us the fresh food stylings of West Java.

“If you leave a Sundanese person in a garden, they will be happy,” is a saying I heard many times throughout my year in Bandung, capital of West Java. Sundanese cuisine is renowned for its freshness and vast array of veggies, served raw, as steamed salads or in soups. There’s always a big basket of lalap – chunks of cucumber, choko, cabbage, lettuce leaves and kemangi (lemon basil) – at Sundanese restaurants, which almost always operate as a buffet. If a vegetarian or vegan were to reside in Indonesia, I’d wholeheartedly recommend West Java. 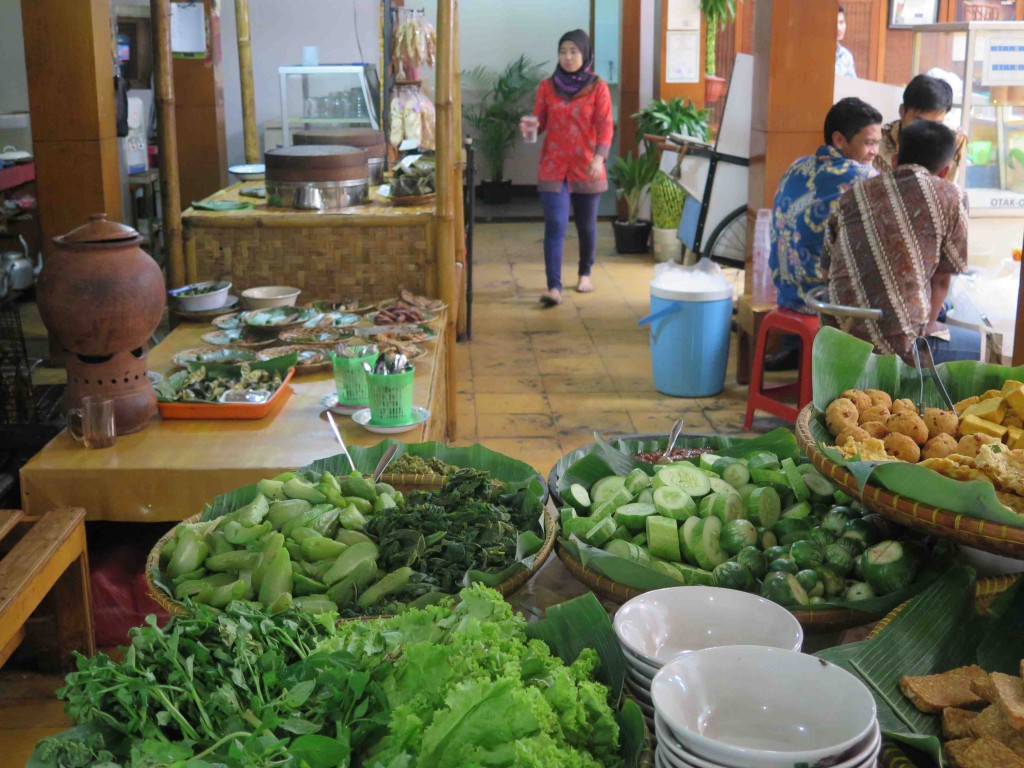 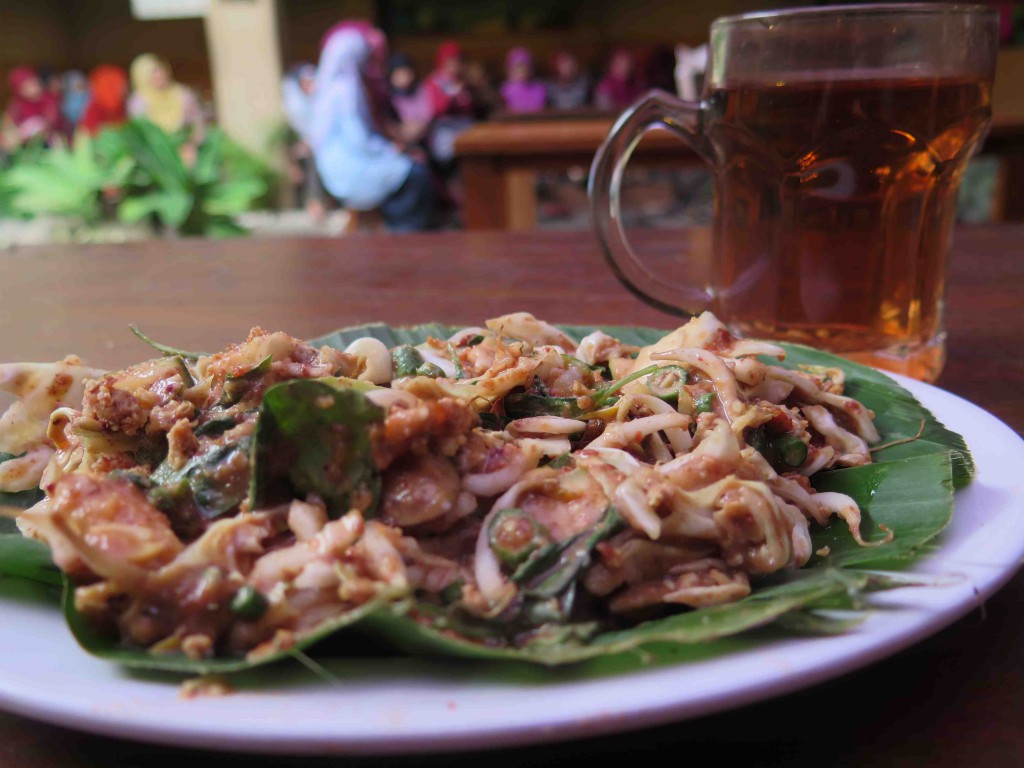 Karedok is an excellent choice for a tasty, light lunch.  A hearty paste of powdered peanuts, ginger, galangal, garlic, terasi, palm sugar, bird’s eye chilies and a smidge of water is mashed together with a pestle in a wide, shallow mortar, then in go raw, crunchy snake beans, bean sprouts, cabbage, cucumber, baby eggplant and kemangi. Lotek is generally always available alongside karedok as they’re dressed with the same saus bumbu bumbu (peanut sauce) and prepared with the same method, but unlike karedok its ingredients, spinach, green beans, cabbage and kemangi, are steamed.

Sayur asem, another light lunch winner, is tamarind soup tempered with kaffir lime, lemongrass and bay leaves and packed with tender veggies; chunks of waluh (choko), thick rounds of sweet corn, green beans, peanuts and melinjo. Melinjo are generally considered to be nuts or seeds, but they’re actually little enclosures for the production of spores, with a thin skin covering a crisp shell containing a soft, creamy substance similar to macadamia but with a tiny bitter bite which is tremendously toothsome.

As West Java is primarily mountainous many areas enjoy a relatively cool climate, and with these brisker climes came the ability to better control the fermentation of certain foods. Though with the advent of coolers fermentation is now practiced throughout Java, the tradition lies in the west. Perhaps the most popular fermented food is oncom, the by-product of the tempeh production process, but it can also be made from the by-product of peanuts and coconuts after their oil has been extracted. Indonesians are masters at making every morsel count, and these morsels are scrumptious; nutty, earthy and salty. Oncom is usually served steamed in banana leaves on its own or with rice, or sprinkled atop surabi, which are similar to crumpets but with a batter of rice flour and coconut milk baked in little earthenware pans.

Colenak is a combination of dicocol (to be dipped in sauce) and enak (delicious). No false advertising here. Fermented cassava, called peuyeum in Sundanese, is grilled and dolloped with a thick, sinfully sweet concoction of palm sugar and finely shredded coconut. The texture of butter yellow ripe peuyeum is sumptuously smooth with the fermented spike adored by the Sundanese. On a chilly Bandung eve, colenak and bandrek are a perfect pair. This traditional beverage of ginger, cinnamon, pepper, cloves, nutmeg, chili and palm sugar is sometimes served with slender ribbons of young coconut, and leaves warm embers lingering on your tongue long after the last sip. Bandrek in Lembang, a town at the base of Tangkuban Perahu, a volcano crater 20 kilometres north of Bandung, is renowned for its potency.

Consumed across Asia but particularly favoured in Indonesia by the Sundanese, pete are plump, almond-shaped beans snuggled into a long green pod which is grilled or fried, or the beans are extracted and added to nasi goreng or sautéed with oncom. Their flavour and residual aroma are so pungent they’re best balanced by other robustly flavoured foods such as telur asin (salted duck egg). Like pete, jengkol, a large, round legume native to Southeast Asia, have an extremely intense smell and unique, deep essence that loiters in your mouth for hours unless it’s doused with black coffee. They’re often curried in a sauce similar to rendang or fried with chilies and spring onions. 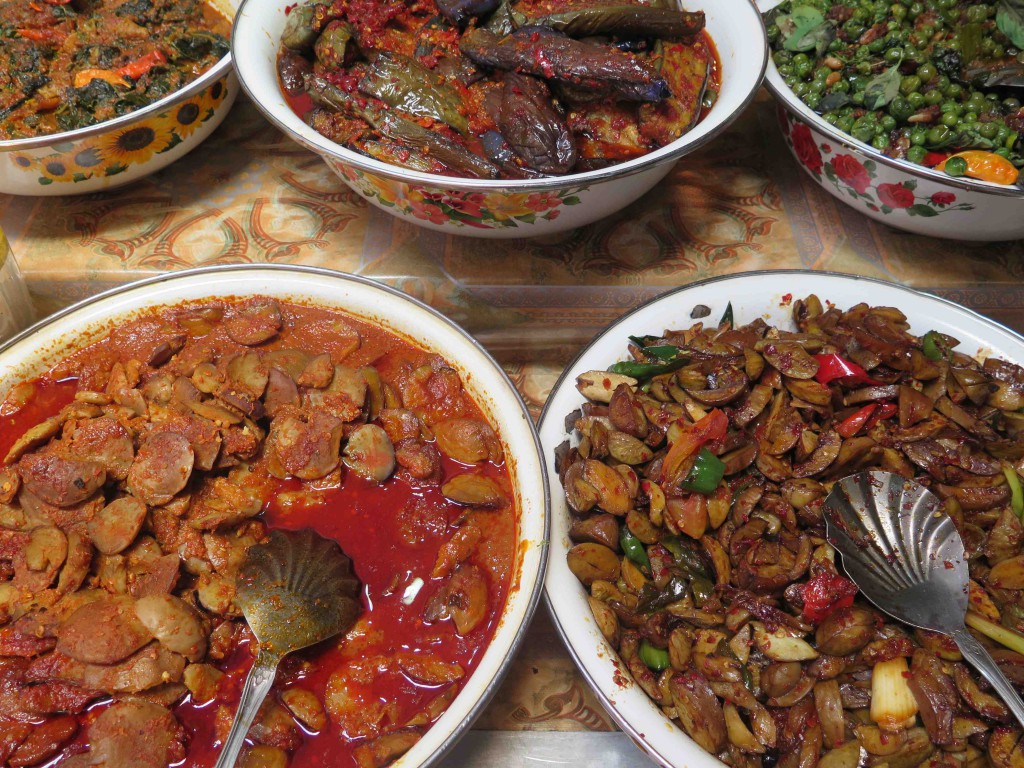 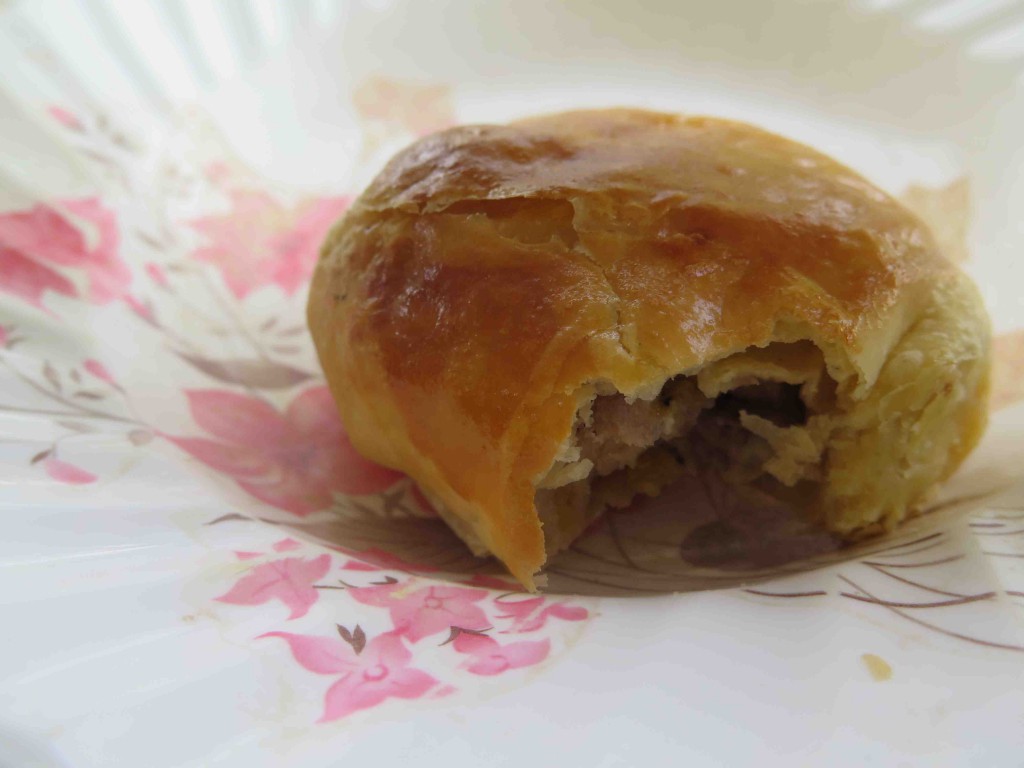 If one visits Bandung it is wise just before departure to purchase a big box of pisang bolen, the city’s most popular oleh oleh product. Oleh oleh is the Great Indonesian Tradition of bringing home the specialty snack of the region one has visited to share with friends, family and colleagues. Pisang bolen are rich, buttery wheat flour pastries filled with gooey banana, banana and chocolate, or banana and cheese. Accompanied by black local coffee they’re Indonesian pastry perfection.

Julia Winterflood discovered a vertiginous variety of scrumptious Sundanese and enticing Indonesian fare while living in Bandung, West Java. Determined to show her fellow food fiends that there is so much more to the culinary creations of the world’s largest archipelagic nation than nasi goreng, she compiled an A-Z of her Favourite Indonesian Cuisine, comprising 77 entries at last count.