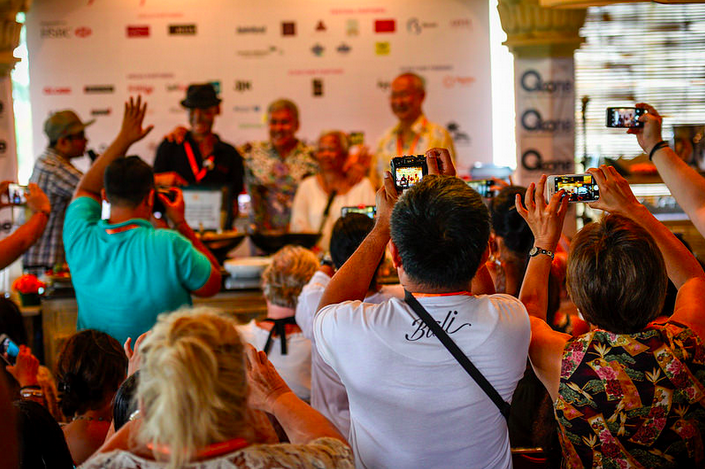 After a three-day celebration with more than 6,500 foodies from across Indonesia and the globe, the inaugural Ubud Food Festival (UFF) has now officially drawn to a close.

Addressing the crowd at the Festival’s Closing Night Party (7 June), UFF Founder & Director Janet DeNeefe said she had been overwhelmed by the positive energy and excitement from both chefs and Festival-goers alike.

“Food really is a universal language, it brings people together from all corners of the world,” she said. “Never have I seen so many smiling faces together in one place; food really must be the secret ingredient to a happy and fulfilling life!”

“Indonesia is faced with the challenge of both moving forward as a leading culinary destination, while also retaining its linkages with traditional cooking and customs,” Wongso said. “That’s why the celebration of Indonesian food in a modern context, like the Ubud Food Festival, is so important.”

Thousands of Indonesian and international audiences also flocked to the program’s free events at Taman Baca, including the Food Forum series delving into topical food issues such as Bali’s rice crisis, GMO foods and medicinal eating.

“Using ingredients like tempe, which actually has much stronger nutritional properties than tofu, Indonesian food has a unique opportunity to contribute to the healthy food movement,” remarked one of Indonesia’s leading food journalists and technologists, Professor F.G. Winarno.

“We need to shift away from the perception that Indonesian food isn’t healthy and embrace the many elements of our national cuisine that are,” he said. “Greater awareness of nutritional eating among the Indonesian population is a critical part of this.”

“We have definitely taken inspiration from Ubud’s gems,” reflected Asia’s leading pastry chef Janice Wong, who hosted the Mad Hatters Tea Party with her speciality macaroons and churros, amongst other delights.

“We came to the Ubud Food Festival without really knowing what we were going to prepare,” she said. “That’s part of the challenge; coming to a new culinary landscape and using local ingredients to get creative with your work.”

Reflecting on the UFF’s mission to promote Indonesia as a leading food destination, DeNeefe said she believes the culinary landscape of Indonesian cuisine will grow and evolve due to the pure enthusiasm of the people.

“With more than half of our speaker line-up and audiences constituted by Indonesian nationals, it’s evident just how much Indonesians love good food,” she said. “We’re so honoured to be a part of that, and help enrich the Indonesian food scene both at home and overseas for many years to come.”