Come and get it! UFF18 lineup and first round of tickets are on the table! 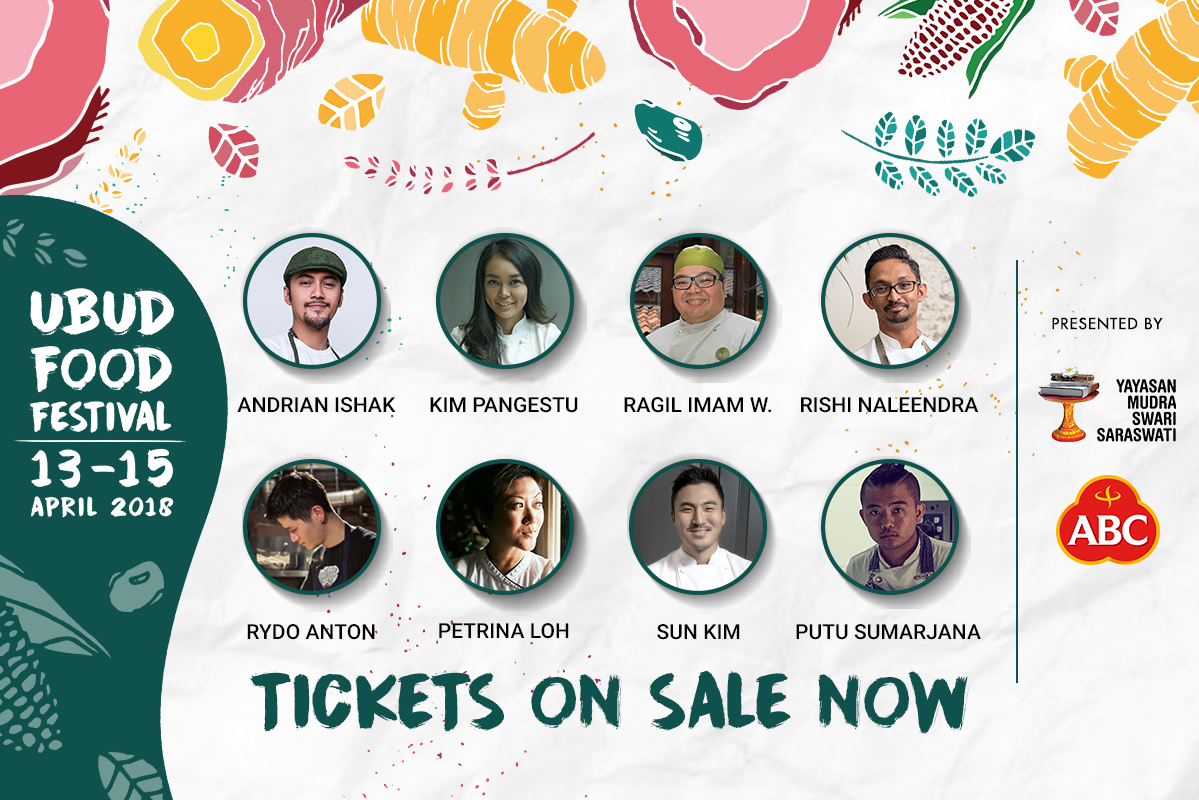 Almost 100 chefs, restaurateurs, farmers, social entrepreneurs and outstanding innovators will descend on Bali for the fourth Ubud Food Festival Presented by ABC. Today we announced our full lineup and tickets for the Kitchen Stage, Masterclasses, and Food Tours. Our coveted Special Events will be released on 16 February, followed by our expansive range of free events.

Welcoming speakers from across Asia and beyond, the UFF will plate up pioneering culinary insights and ideas and fearless flavors, all energized by the theme ‘Generasi Inovasi’. The theme is inspired by Indonesia’s young, tech-savvy population, which is driving the nation’s booming innovation economy and transforming the entire spectrum of the nation’s food industry.

The UFF is thrilled to welcome Indonesian-born Rydo Anton, Head Chef of Gaggan in Bangkok. The first restaurant to maintain the top spot on the Asia’s 50 Best Restaurants list for three consecutive years, at last year’s World’s 50 Best it came in at number seven. Chef Rydo will be welcomed by Ubud’s hometown heroes Locavore for a Special Event serious foodies will not want to miss.

Along with Gaggan’s two Michelin stars, this year’s international guests are similarly sparkling. In Singapore, Korean Chef Sun Kim’s Meta received its first last year, as did Australian Chef Sam Aisbett‘s Whitegrass, and Sri Lankan Chef Rishi Naleendra‘s Cheek by Jowl. Chef Rishi is the first Sri Lankan to receive Michelin status. They’ll be joined by Chef Jun Lee, whose Soigné in Seoul was awarded one star in 2016 and 2017.

In one of the Festival’s most diverse collaborations, UFF Founder & Director Janet DeNeefe will be sharing her kitchen with the Jungle Chef Charles Toto from the Papuan highlands, and food activist and author Dicky Senda from West Timor, for a very special long table lunch spotlighting Indonesia’s lesser known eastern regions.

While this year’s Festival looks to the future, those who paved the way for today’s generation are also celebrated at UFF18. Among them are pioneering food writer Petty Elliott, Amanda Niode of the Omar Niode Foundation, and Queen of Indonesian cuisine, Ibu Sisca Soewitomo, who this year will collaborate with her daughter Novia R Soewitomo.

“We’re so excited to bring together almost 100 speakers to dish up our fourth Ubud Food Festival,” commented DeNeefe. “From the Balinese farmers to the app designers, the social entrepreneurs to the world class chefs, they all show the reason why the world should be paying attention to Indonesia’s incredible creativity and ingenuity, and of course its fantastic food. We look forward to learning from these rising stars and culinary heroes with you in April, and feasting together too!”